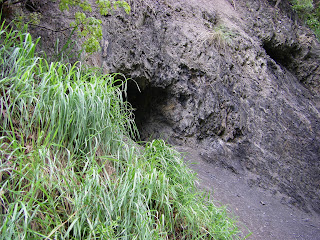 They had gotten used to starving and hiding in caves.  STARVING. COWERING IN FEAR.  "They" were the descendants of the people who saw God split the sea, bring down the walls of Jericho, and feed them in the middle of a desert for 40 years. HE DELIVERED THEM ALL THOSE YEARS AGO BECAUSE HE DIDN'T WANT THE PEOPLE HE LOVED TO BE SLAVES.  And now, because they had sinned, God allowed an army to overtake them.

The army that had overcome them was so scary and barbaric that they were afraid to live out in the open.  They hid in caves. They ventured outside to secretly plant food, and then these armies "thick as locusts with droves of camels too numerous to count" (Judges 6)  came and stole all their food, all their livestock and all their hope. They were slaves again  - with a slave mentality - cowering in fear, starving to death, accepting the awful life they were being forced to live.

Once again, these people cried out to the God who loved them. The God they had abandoned.   They asked Him to rescue them from this slavery - and-  once again God heard their cry and delivered them.  He choose Gideon, who was also a cowering cave dweller to be their champion.  You can read the story of Gideon beginning in Judges Chapter 6.  God used him to deliver the people and defeat their enemies.

Nice story. So what.
Well, I noticed that Gideon kept asking God for signs to prove that He was really with him. Because, let's face it, the armies that God was asking Gideon to stand up to were pretty formidable. Gideon didn't think he had the strength to do what God was asking him to do. AND GIDEON WAS ACCURATE. HE DIDN'T HAVE THE STRENGTH.

Presently, the world is simply and seemingly out of control.  We have no power, seemingly, to stand up against, or overcome the evil flood that is sweeping the planet.  And then, in our personal lives, life can be scary, and sad, and frustrating, and overwhelming.  We feel weak, and limp, and powerless and without strength.

This verse jumped out to me today: "Then the Lord turned to him and said 'Go with the strength you have and rescue Israel from the Midianites.  I am sending you.'" (Judges 6:14)


"Go with the strength you have"

God didn't tell Gideon, the cowering cave dweller, "Here let me give you supernatural strength to fight this army."  No.

This reminds me that when I have become a cowering cave dweller because I have forgotten that I am Rescued Royalty....and I cry out to God to rescue me - He will.  He does.  Jesus, my Deliverer says,

“The Spirit of the Lord is upon me, for he has anointed me to bring Good News to the poor. He has sent me to proclaim that captives will be released, that the blind will see, that the oppressed will be set free.."
(Luke 4:18)

Whatever is causing me and you to hide in fear - sickness, despair, depression, fear, anger, lust and more - God is calling us to walk out of that cave and back in to the light.  He isn't going to give us the power to defeat our enemy AND THEN WE GO. NO. First comes the GO and then comes the STRENGTH.  Because we are accurate, as Gideon was,  when we say that we don't have the strength. That our enemy is too powerful for us. That is THE TRUTH.  But... we are in a better position than Gideon was. Why? Because our enemy has already been defeated.  And he knows it.

God is saying to us, "Just GO with the strength you have."

However weak you feel... GO.   Don't keep living in a cave, starving to death spiritually, emotionally, physically, because you have evaluated the situation and have decided that you don't have the strength to defeat whatever is defeating you.

Remember that you are a ROYAL priesthood.. and.. Walk to the edge of your slave cave....take a step outside...and...

Go with the strength you have
and
Trust God to do the fighting for you.

Posted by Marie Armenia at 9:03 AM