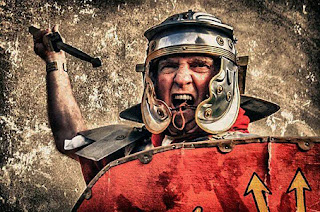 
They knew the RESURRECTED JESUS personally.
Acts 1:3 reads: "After his suffering, he presented himself to them and gave many convincing proofs that he was alive." He appeared to them over a period of forty days and spoke about the kingdom of God."

Those of us who identify ourselves as followers of Jesus owe a great and eternal gratitude to these founders of the faith and what they focused on.  Thankfully, the epistle of Peter is not about organizing a protest against Nero and his predisposition to feeding Christians to the lions. We should be forever grateful that Paul didn't write his epistles to the early church urging them to boycott the local coffee shop because of the color of the cups they were using!!!!!!  No..they focused on Jesus... who He is.. what He had done.. what He was going to do.. and they had GREAT GREAT POWER.. they lived without fear of losing their very lives....in order that THE GOSPEL would be preached.  They focused on eternity.. and telling people they could choose where they would be spending it.

Well, to be fair, they weren't ALWAYS SO FOCUSED.  Acts 1:6 shows us their initial focus: "Then they gathered around him and asked him, “Lord, are you at this time going to restore the kingdom to Israel?”

Jesus was speaking to them for forty days about THE KINGDOM OF GOD, but just three verses later we see that their focus was getting those ROMAN SOLDIERS OUT OF ISRAEL.. and running their own country once again.

It must have been a confusing season for them. First, Jesus is the most popular man alive.. healing people, raising the dead. Then Jesus is dead. Then He's alive. And hanging out with them again. FOR FORTY DAYS.  Certainly this Resurrected Man had the power to drive the Roman Soldiers out. He most certainly did.

When the Holy Spirit came and drenched them from the inside out, they understood the TRUTH.  Keep your eyes on The One who is coming back.
It might be nice for you and your family and your neighbors to get a better government. I welcome that. But when you and your family and your neighbors and I face eternity, it won't really matter if a Republican or a Democrat is running the country.  The only thing that will matter is that Jesus is King of Kings... and whether we know Him or not.
The New Testament Church KNEW THE RESURRECTED Jesus.  They knew Him. They were filled with the Holy Spirit. THIS IS THE EXAMPLE WE HAVE BEEN GIVEN.
LIFT UP JESUS.
TELL ABOUT HIS LOVE.
LET THE HOLY SPIRIT COMFORT US.
So many of us are living under a cloud of occupation.  We have, in our own strength, no power to overcome the Roman Soldiers in our lives.  Be comforted today.  Remember that just because they aren't gone today doesn't mean they won't be gone tomorrow.  Jesus has power over every Roman Soldier. Look to Him. Please... stop.. and remember who Jesus is.. and HOW MUCH HE LOVES YOU.
"Roman Soldiers" will come and go.
Jesus is the same yesterday, today and forever.

Posted by Marie Armenia at 8:48 AM

Yes! Drenched by the Holy Spirit we are given a fresh vision of Philippians 1:21 "For to me to live is Christ, and to die is gain."