THEY TOOK THE MONEY AND LIED. 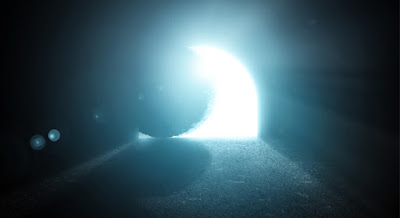 SOOOOOOoooo then you're a nice Italian guy who grew up in Italy. You were drafted in to the Roman Army and you've been walking all over the map conquering nations. The Roman Empire? You're helping to create it. Right now you're living in the country of Israel. You are unfamiliar with the Jewish people, their teachings... AND.... their reasons for asking for a tomb to be guarded.

There you sit.  Guarding a tomb.  You're a man's man, a conqueror of nations. What kind of people decide to use the vast and mighty power of the Roman Empire to GUARD A TOMB???

What an insult!  But you do what you're told and find yourself sleeping on the hard dirt outside the city.  Maybe you're dreaming of your Italian home, and your Italian family and the bed you used to sleep in.   And then:

"Early on Sunday morning,as the new day was dawning, Mary Magdalene and the other Mary went out to visit the tomb. Suddenly there was a great earthquake! For an angel of the Lord came down from heaven, rolled aside the stone, and sat on it. His face shone like lightning, and his clothing was as white as snow. The guards shook with fear when they saw him, and they fell into a dead faint." (Matthew 28:1-4 NLB)

Who fails at such a no-brainer job as guarding a tomb?  You did.
How will you explain this to your superiors?

"...some of the guards went into the city and told the leading priests what had happened. A meeting with the elders was called, and they decided to give the soldiers a large bribe. They told the soldiers, “You must say, ‘Jesus’ disciples came during the night while we were sleeping, and they stole his body.’ If the governor hears about it, we’ll stand up for you so you won’t get in trouble.” So the guards accepted the bribe and said what they were told to say. Their story spread widely among the Jews, and they still tell it today." (v 11-15)

They took the money and lied. Why did they go to the leading priests instead of to their own superiors?  To save their own skin.  To come up with a way to not be punished for their failure.  They were SO FOCUSED ON THEIR FAILURE THAT THEY COULD NOT SEE THE VICTORY GOD HAD JUST GIVEN TO HUMANITY.

I think one of them might have said,  "Wait! We just felt an earthquake, saw an angel sitting on the stone he rolled away, witnessed that the tomb was empty.  We KNOW that no one came to steal the body of Jesus. What group of Jews would be strong enough to overcome a band of Roman Soldiers? He's alive."   Focusing on failure keeps our focus from the One who defeated it for us. Nope. They kept their jobs and lost their souls.

I wonder about those guards.  Over the years, as they watched Christians being persecuted for their faith did they ever secretly whisper to themselves, "But it's true. He did rise from the dead. He IS alive.  I felt the earthquake, I saw the angel with my own eyes. No one stole His body. He is resurrected from the dead!"  They KNEW the Truth.  Inside their hearts, they KNEW what REALLY happened.

I wonder about those elders and religious leaders, too.  They KNEW that the story they were spreading was NOT true.  They knew the guards weren't making up the story of the angel at the empty tomb.

How did these people sleep at night?

The guards and their hush money was spent eventually and they were left knowing they were men who knew the Truth but choose the Lie.


How much money does it take to deny what you saw, what you felt, what you KNOW is the truth?


"For what shall it profit a man, if he shall gain the whole world, and lose his own soul?"
Mark 8:36