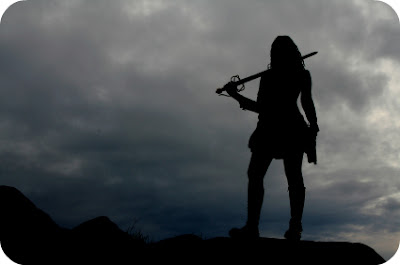 What does it mean to be fearless?


The dictionary tells me it means:

It also uses words like "bold, brave, courageous, heroic and daring" to describe a person who is fearless.
Sometimes... I feel like that woman in the picture.  I feel bold and brave and I lack any fear.
Sometimes...I feel like she looks.
BUT....

.....Sometimes I am afraid.
I beat myself up for being afraid.
I remind myself that "fear is the opposite of faith."
I scold myself for having fear.

I think we've given ourselves an impossible goal to achieve on our own when our goal is to live without fear.

God did not call us to fake a fearlessness we do not have.  Just because we say we are not afraid doesn't mean we are not afraid. We are living in a world of terror.  Therefore the world is terrifying. The media reminds us of this every minute of every hour of every day.  FEAR. FEAR. FEAR.   We have nuclear weapons, we have terrorists, we have viruses that can kill us.   We have people we love who can be taken from us - without warning - at any minute.  We hear doctor's reports that predict our demise.

TRUTH? The world is TERRIFYING.  Even the most fearless among us have moments when fear grips our hearts.

I think about the story in Mark 4 of Jesus being asleep in a boat while the disciples, who were seasoned fisherman, were TERRIFIED that they were going to die.
The Bible tells us that the waves were crashing over the boat so much that it was "nearly swamped." It was about to sink. These men were used to being on the sea. They were used to enduring storms. But THIS storm on THIS day was the one, they were sure, that was going to end their lives.   And we know that Jesus got up and calmed the sea with three words, "Quiet. Be still."

I think about my life. What about those moments when I am SURE that THIS storm at THIS time is the one that is going to put me under?  Is Jesus saying to me, "Why are you so afraid? Do you still have no faith?"

A closer study of this story shows the heart of the story.  The disciples said to themselves... after the storm had ended,

If you are going through a storm and the waves are about to sink your boat and it seems like Jesus is asleep in the boat...it's o.k. Be afraid. Be human.  Be real before God because He can read your heart.

ALSO... remember one VERY IMPORTANT FACT:   The disciples were wrong about THAT storm on THAT day. It did not sink them and did not end their lives. Oh, no.
Just because they were convinced there was no hope didn't mean there was no hope.
Just because you are convinced there is no hope doesn't mean there is no hope.
HOPE IN THE LORD.
No one who puts their HOPE.. IN THE LORD.. is EVER DISAPPOINTED. (Isaiah 49:3)

If you are afraid of something right now..you are just like King David - a man God described as being a man after His heart. David wrote about many, many moments that he was afraid. He knew what to do in those moments of fear.
He said,
"When I am afraid, I put my trust in you."
Psalm 56:3

David DID NOT SAY:

"I put my trust in You so I am NEVER afraid."

You may be thinking that your storm at the present time is about to pull you under. Hopelessness has canceled your fearlessness.
It's o.k.

The disciples boat DID NOT sink.. and neither will yours.

The first step in your path toward fearlessness is to admit you are afraid. God will NOT be disappointed if you admit to Him that fear is gripping you. If you don't admit that you have fear, then how can you give it to God?
Talk to Him.  Tell Him the truth.  He can handle it.

The second step is to ask the Holy Spirit to give you the power to give the fear to God.  You cannot, by simple willpower, change your inner heart.  You have no power to erase and eradicate fear. Only the Holy Spirit can do that.

Third... although fear may be an understandable and natural response in your circumstance at the moment..

IT DOES NOT COME FROM GOD.
"For God has not given us a spirit of fear, but of power and of love and of a sound mind." (2 Timothy 1:7).
God has given all His children POWER... LOVE... and A SOUND MIND.  A sound mind = a mind that thinks wisely, calmly and soberly.  Fear is not from your Heavenly Father.  He wants you to give it to Him.

It isn't lack of fear that proves we have faith.

It's having faith when we have fear.


When you give God your fear,
He gives you His peace.

"You, Lord, give true peace to those who depend on you, because they trust you."

Posted by Marie Armenia at 7:42 AM