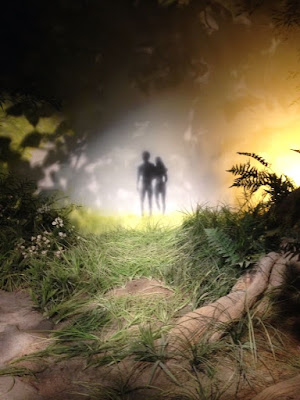 They saw the truth right after they believed The Lie. They were naked, afraid and hiding from the Creator they had disobeyed. Most have heard the story of the serpent tempting Eve, but not all of us understand that the temptation was not about a woman eating a piece of fruit, but about tempting her to change her opinion of the God who had provided it. The serpent got her to believe that her loving Father was keeping something good and pleasing from her. He hasn’t changed his tactics since then. Before she changed her mind about the fruit on the tree, she changed her mind about the One who created it.  The One who provided it.  Believing the Lie brought fear, and shame and Death and nakedness and hiding. They were not created to be afraid and feel shame.
How does God deal with naked and ashamed and hiding people?
He looks for them.
He calls out to them, “Where are you?” He says.

He knew exactly where they were and why they were there.  And the answer He got is the same answer so many of us continue to give Him, “I was afraid of You because I was naked; so I hid.”  (Genesis 3:10). We reach a point where our weakness is exposed, where our sin is out in the open.  So we hide. We feel shame.  God knew where they were, but they needed to stop hiding. To face God.
We don’t understand that being exposed in our sinfulness is the first step toward being healed.
We don't understand the joy that comes from making things right with God - until we make things right with God.

God didn’t say, “Oh, don’t worry about it.  It was just a piece of fruit.” Oh, no, we paid a high price for thinking we know better than God.  We still do. We were not supposed to die. Now, we do.
What does God do with naked people?
He covers their nakedness:
“The Lord God made garments of skin for Adam and his wife and clothed them.” (Genesis 3:21).

He doesn’t say, “Well , just live with your shameful self.”  He loves us. He calls to us. He wants us, sinful nakedness and all.  Rebellion and all. He keeps looking. He keeps calling. He keeps wanting us. Again.
Jesus was faced with the reality of naked shamefulness when the religious Pharisees and teachers of the Law brought a woman before Him who was “caught in the act of adultery” before Him. (John 8:4). He was sitting in front of the Temple, teaching people about His Father, and they dragged her in front of Him and the people gathered around Him. She couldn’t hide anymore.  She was humiliated and exposed. But being exposed was her salvation. She came out of where she was hiding and found forgiveness, “Neither do I condemn you.  Go now and leave your life of sin.” (John 8:11). Pharisees enjoy exposing sin.  Jesus came to cover it.
Jesus Himself was faced with the reality of naked shamefulness on the day He willingly allowed Himself to die naked on a Cross.
He was mocked and ridiculed and laughed at.  Humiliated before all of creation. His Father turned away.  He was exposed so that when we are, God can, once again, cover us in the perfection of His Son. We will be exposed. Every one of us.  The important point is where we are exposed:  Here? or There?
While we are still here -whatever we’ve done can be forgiven. Whatever we’ve destroyed can be resurrected.  Whatever shame we feel can be erased. Being exposed is our salvation. Whatever we’ve done can be undone.
All we have to do is come out of hiding.
“Nothing in all creation is hidden from God. Everything is naked and exposed before his eyes, and he is the one to whom we are accountable. So then, since we have a great High Priest who has entered heaven, Jesus the Son of God, let us hold firmly to what we believe.”  (Hebrews 4:13-14)

Posted by Marie Armenia at 7:14 PM