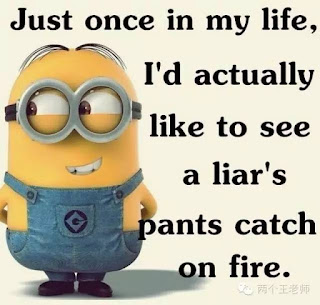 While Moses watched, God wrote on stone with His finger  "The Ten Most Important Ways People On Planet Earth Should Live While They Live On Planet Earth" - commonly referred to as "The Ten Commandments" He chose to limit Himself to only Ten.  Ten things for His People to know.  Me?  I would have needed Ten Thousand Things.  I could never have picked JUST TEN. But God did.

And one of the things God decided was a BIG BIG BIG DEAL... is the way we speak about others. We remember it as being told we should not "bear false witness" against our neighbor.  Well, the term "neighbor" is a very broad term when you investigate it further. It means everyone - family, friends, neighbors, acquaintances. It DOESN'T mean false witness as in the case of being on a witness stand in a courtroom. What it means is.. "Whatever you say about somebody better be the TRUTH about that person."   Christians are admonished:

WOW.  That verse is a two-edged sword.
We have to STOP lying and START telling the truth.
Those Christians, in the church in Ephesus, were LYING to each other...  WHAT???? WHAT????  CHRISTIANS?  Lying to each other????


Two things we must do:


STOP. Lying.
START. Telling the truth.
What a concept.


That church at Ephesus.  What a disgrace.  To LIE to each other. To NOT tell the TRUTH?
I wonder if they were silly enough to IGNORE the basic commandments as they focused on more "important" things like church growth plans and budget meetings and nineteen meetings to decide the color of the paint for the Children's Ministry wing?

Maybe those Ephesians thought God cared about other stuff instead of the stuff He actually said.  I wonder if they thought He would just overlook them being false with one another because they had raised three million dollars to build a new church?

What WERE THEY thinking???

What would happen if our pants would IMMEDIATELY catch on fire if we lied to - or ABOUT - each other?

Uhhh.... our church buildings would have burned to the ground decades ago.


Can the Holy Spirit - The Spirit of Truth - be in control of a person -or persons -  who don't love, embrace and speak the Truth?

Posted by Marie Armenia at 8:11 AM