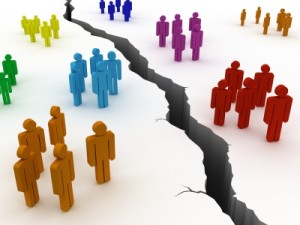 You know... those of us who are "in" Christ Jesus have been given the gift of living a guilt-free life.  Our acceptance by and from God has everything to do with the perfection of Jesus and little to do with our behavior.  We are not living under Old Testament Law but rejoicing in New Testament Grace... And here comes the line:  HAVING SAID THAT....

The whole BIBLE is God's Word.  And we can learn about God and His Ways from the WHOLE BIBLE.  So....while we are hidden in Christ.. while there is nothing to fear about God's disapproval... while our perfection comes from JESUS ALONE and HIS BLOOD...

I was reading the Bible this morning and discovered there are things God hates.  Despises.  Horrendous.  An ABOMINATION.. Yes.. Old Testament words.. but still a way to see the heart of our Father.  I know He isn't waiting to hit me on the head with a holy whack... but still... I was interested to learn about the things God hates.  Not at all the things I would think matter to Him.  But they do.

In Proverbs, Chapter Six, verses 16-19, there is a list which could be titled, "Seven Things God Hates."   So I studied the words.  Looked up their meaning.  First of all the word "HATE" means.. well..HATE.  He doesn't like it. He gets annoyed at people who are this way and do these things.  These things are an ABOMINATION TO HIM.. Really?  Really. I will let you read the whole list yourself.. but..

AS THE CHRISTMAS SEASON DAWNS UPON US.. it might be good to know that #7 of God's Top Seven Things To Hate is...


"he who sows discord among brethren"

"a person who sows discord in a family."  (NLT)

"one who spreads discord and rumors among brethren" (AMP)

Did you know that was in the Bible?
Did you know that it is something GOD DESPISES?
Are you aware that as you whisper little whispers against family members.. God's family and YOUR family... you are displeasing Him?

AND.. if you choose to leave your church.. find another family of believers to worship with... make SURE YOU DO IT WITHOUT DIVIDING THE FAMILY YOU ARE ALREADY IN.  God hates when a person sows discord in His Family. Yes. He does.  You may be correct in all the reasons you have for being discontent in your church, with your pastor...BUT... sowing discord.. dividing that family... is something God hates.

Over the years I have discovered that a divisive person is often difficult to recognize because they are sowing discord.. sowing it one little seed at a time.  They don't look divisive.  They look like one of us.  That's why Paul instructs the New Testament Churches to "MARK" a divisive person. Point them out.   They act like they love you even as they whisper in to the ears of others  a sentence here, a roll-of-the-eye there... and before long.. a great big divide has appeared.  They change others opinions of family members... one whisper at a time.

God wants families to get along.
God wants peace in every family.
The family of God.
And YOUR family.

It is the way satan divides.  And He considers it despicable.

The solution?
Don't do it.

Love you and Merry Christmas.

Posted by Marie Armenia at 9:13 AM