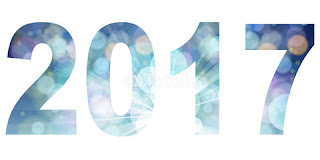 Every year on New Year's Day, my mother would think of a rhyming saying for that year.  In 2015, her last year on earth, her phrase was, "May Jesus be seen in two thousand fifteen."

She meant that she wanted the world to see Jesus in her and through her that year.  It was the same desire every year.   She was unaware that Jesus would be seen, in reality, by her, face-to-face in 2015.  If you knew my mother (and father) you would know that 2015 was the best year they ever lived because it was the year they saw the face of Jesus.

For me, however, 2015 was a difficult and sad year.
My parents were the anchors of my family, and I knew now that life would be about sailing on unfamiliar waters.

2016 was happier, for sure, even though their absence left a big hole that no one can fill.  I learned that Jesus can fill every void.  And He did.  He is faithful.

But today, I just have hope that the same Jesus who has been faithful every year will be faithful in 2017.  For me. And for you.

And my motto this year?


"May Jesus be seen in two thousand seventeen."

"Blessed are those whose help is the God of Jacob,whose hope is in

the Lord their God. He is the Maker of heaven and earth, the sea, and

everything in them—he remains faithful forever. He upholds the cause

of the oppressed and gives food to the hungry.

Posted by Marie Armenia at 8:32 AM