THE WOMAN WALKING ON THE SIDE OF THE ROAD 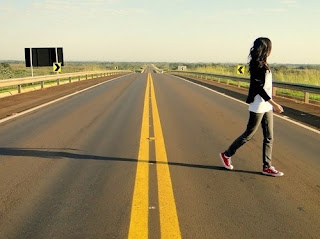 My husband and I were driving down a country road near our home in Pennsylvania. It was August, 1991. To say it was a hot day does not fully describe the suffocating, gates-of-Hell humidity or the feeling of being a cookie baking in a 900 degree oven when standing outside. It was HOT, HOT, HOT. As we drove, we came up behind a woman who was walking on our side of the road. The road was surrounded by fields of corn. Just hot, sticky, mosquito infested fields. And there she was, walking. I felt bad for her. I whispered a quick prayer for her and thanked God for an air-conditioned car... all at the same time. And then I forgot all about her.
I should mention that my husband and I were about to open an inner-city church in less than a month.  He was going to be a pastor and I was going to be a pastor's wife. WOW.  God had opened doors for us to be affiliated with a huge, church in another state and they were serving as our overseers. We were thrilled about God giving us the opportunity to serve Him that way.
I don’t remember where we were going that day, but it was about an hour south of our home in Camp Hill. About three hours later we were driving home on the same road. We came up to a small grocery store/gas station and my husband made a last-minute decision to stop and get gas. As we pulled in to the gas station, the woman who was walking on the side of the road three hours earlier was walking in the other direction now and was exactly where we were stopping.
Three hours earlier I’d prayed for her and three hours later she was right in front of my face. She was walking right by the gas station.
I walked up to her and offered to buy her something to drink. She immediately accepted my offer. I felt good watching her drink an ice-cold soft drink. I bought her a second one. She was not a well cared for woman. Her face was dirty and pimpled, she was missing multiple teeth, her hair was long and sweaty and stringy, and her clothes were worn. She smelled bad. MY plan for our interaction was to buy her whatever she wanted in that small grocery store, and then be on my way. God had a different plan.
“Is there anything else you want?”, I asked. “Are you hungry? Do you want something to eat?”
“Are you going anywhere near Camp Hill? I could use a ride home.”
What? She wanted a ride? In our car? Now? Really? Really Lord? You want me to let her drive in our car? Lord, she might be a serial killer. I don’t want her in our car. She’s all sweaty and stinky. I’m afraid of her a little, Lord.
I said “Sure. Hop in.”
As my husband drove, I turned to speak to her. I’d like to say it was because of interest and concern, but the truth is, I wanted to be sure to be able to disarm her if she took out a gun or a knife. She was explaining that she had walked to visit her boyfriend who was in prison. She was telling me stuff and I was half-listening and half-watching for her robbery and/or murder attempt. And then He spoke:
“Would you lay down and give up your life to serve and minister to her?” I thought, “Duh, Lord. We are laying down and giving up our lives to serve and minister to her and people like her. Of course. YES!” Proud of my humble answer, I continued to listen to her speak. And then He spoke again:
“Would you give up your actual life just for her? Your physical life? Just so that she could live forever?”  Ahhh.... well now, that was a more difficult question. I considered it. I considered dying at thirty-nine years of age for JUST this woman.... and my answer to God was that IF by my death... and through HER testimony.. MANY, MANY, MANY would come to Him...(and someone might write a book and do a movie about my sacrifice?) then my answer was “YES. I would physically die just for her... assuming of course my death would have a GREAT, GREAT, AMAZING IMPACT on kazillions of souls.”  Proud of my humble answer, I thought the questions were over. And then He spoke again:
“Would you give your son’s life? Would you allow your son’s life - his physical life - to be given just for this woman?” This question sucked the air out of my heart. Why would You ask such a thing?  Why would You require such a thing?  My son? My only son? My only child? The joy of my life? Philip? Philip? My most precious treasure on earth? No matter how many ways I tried to create a scenario where allowing Philip to die for this woman made sense or would be worth it - I could not find one. For a couple of million souls? No.  My son? I wished I had a different answer, but who can lie to God?  So.. I gave Him my  honest answer:
“No."
And then He spoke His last two words to me.

“I did.”
He became a stranger to me. “THIS is what You mean when You say, ‘Love’..THIS is LOVE?” It was alien to me. I could not comprehend that Love. I did not have that kind of love. What I had been identifying as “love” wasn’t even close to what He feels for me. For us. What love is this? When we got home, I fell to my knees in broken repentance. “Father, I know nothing about love. Teach me. Fill me. Change me.“
From that day until this moment, I remember that whatever I do... whenever I do it... has to be whatever it takes to who ever needs to take it.  I cannot have that kind of LOVE unless I allow Him to cultivate it in me.  In every situation, with every person I know... nice, not-nice, good, not-good, pure or evil.. He is teaching me love.

I AM LEARNING LOVE. It takes another Power from Another Place.

I am thankful I do not need to give my son because He has given His.
Posted by Marie Armenia at 7:46 AM