COMPROMISE AND THE WONDERFUL CHRISTIANS WHO DO 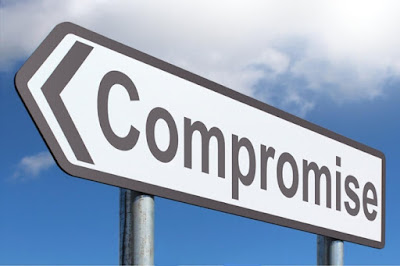 Compromise.  Seems like a word we all need to embrace or we are going to destroy ourselves and the world.  Compromise.  One definition is: "a settlement of a dispute that is reached by each side making concessions; settle a dispute by mutual concession."Compromise.  In our destructive, hate-filled society, it seems like the answer.  We all agree to disagree and just get on with our lives.  Seems. Like. The Solution. Unless you continue to search the definition of the word. It also means: "accept standards that are lower than is desirable.

as in - "we were not prepared to compromise on safety"
Compromise ALSO means:  "to weaken (a reputation or principle) by accepting standards that are lower than is desirable."


You have to change your mind - and lower your standards - in order to compromise.

But getting along with God seems...uhhh... more important.   To me it does.


All of a sudden, I see posts on Social Media by those wonderful compromising Christians. They seem so loving to frown at those archaic standards in the Bible.  They talk about God's love... that's great.. I love God's love...  I love them, also.
AND if they want to compromise, that's their choice. Compromisers are always about CHOICE.  Here's the deal though:
It isn't the compromise that surprises me.
It's the venom of the compromisers.
It isn't like they calmly say, "Oh, I've decided to change my mind about what I believe God's standard is" and then go about their daily lives.
OH NO... they INSIST you agree with them.
They INSIST you compromise with their compromise.
It is unacceptable to them for you to continue to hold to the beliefs you have always held.  It isn't enough for them to change - they INSIST that you change with them.
They turn on anyone who will not agree with them.
Especially other Christians.  They rant..and dare I say.. RAVE against anyone who has the nerve to not want to compromise.
I mean.. I want people to like me.. I don't want to upset anyone. I am aware that I have no right to cast a stone at anyone about anything.. EVER... still..
God is merciful, but He does not compromise.
This concept seems confusing to so many.  Why is that?
God is merciful, loving, forgiving and full of compassion toward humans. He knows we are weak. He knows we will sin. He LONGS TO FORGIVE.
God has mercy...but He doesn't COMPROMISE.
God doesn't say, "Oh, you know what? Now that it's 2018, I'm thinking that maybe I've been a little hard-nosed about all those silly little laws about sex, and murder, and lying and jealousy.  Especially since those lawbreakers are people you are related to.  WHY DON'T I JUST COMPROMISE AND LET SIN RULE AND REIGN IN THE UNIVERSE?"
HE LOVES US TOO MUCH TO COMPROMISE ON THE REASON FOR ALL THE PAIN AND SUFFERING IN THE WORLD - SIN.
He is willing to forgive you for it. He is longing to take away that guilt that is crushing you because of it...BUT...
He doesn't compromise His standards. He still has something He calls sin. And He still insists on telling us that it will separate us from Him. Now. And forever.
My enlightened fellow Christians are vitriolic (filled with bitter criticism or malice) toward anyone who has the nerve to say something like, "I choose to believe what I've always believed."
It isn't judging THEM to stick to what I BELIEVE.
I STILL BELIEVE WHAT I HAVE ALWAYS BELIEVED - God LONGS TO FORGIVE SIN... BUT HE DOESN'T OVERLOOK IT...

And rather than fall on the mercy of God,they decide God isn't relevant anymore.
Whether you've have an abortion, or your brother is a homosexual, or your son is committing adultery, or your daughter is sleeping with her boyfriend, or your nephew struggles with drunkeness, or you allow yourself to hate someone, or you refuse to forgive someone who has asked for forgiveness, or you are jealous...

DOES GOD STILL LOVE THEM? LOVE YOU? LOVE US?
DOES HE CONTINUE TO HAVE LONGSUFFERING AND LOVE TOWARD THOSE OF US WHO ARE WEAK IN OUR FLESH? ABSOLUTELY!!
HOWEVER...God doesn't compromise by telling you not to worry about it.  He doesn't say it isn't sin - He says "I sent my Son to completely pay for that sin.  I sent my Son to cleanse you of the guilt and anxiety that sin brings."
If someone is ill, we don't "compromise" and convince them they aren't sick. How is that LOVE? Would you tell a child with a fever, "Don't worry about it. You aren't sick. You are merely expressing yourself."
Are you JUDGING that child by wanting to have their illness cured?
Are you being narrow minded for refusing to go along with the crowd who is insisting that the fever is not caused by an illness?
Are you loving that kid by overlooking their disease?
NO.. we would get that child MEDICINE so that they can be healed.
Real LOVE doesn't overlook the sickness. Real LOVE admits it is there, and finds the cure.
Real LOVE is what God has. He expects us to ADMIT we have the sickness called "sin" and ask Him for the cure:  The Blood of Jesus.
If you have decided that God didn't mean what God said, and you have decided that what was formerly an abomination to God is now acceptable behavior - you are allowed to believe that.
If I don't want to lower, change, or reinterpret what I believe about God, that is my right.
Right? Right.
My whole point is to state this fact and ask the question that follows it:
The compromisers always have such venom toward those who refuse to compromise.  Why is that?
"For the time will come when people will not tolerate sound doctrine and accurate instruction [that challenges them with God’s truth]; but wanting to have their ears tickled [with something pleasing], they will accumulate for themselves [many] teachers [one after another, chosen] to satisfy their own desires and to support the errors they hold."
2 Timothy 4:3
(AMP)
Posted by Marie Armenia at 8:40 AM