REQUIEM FOR THE CAMEL 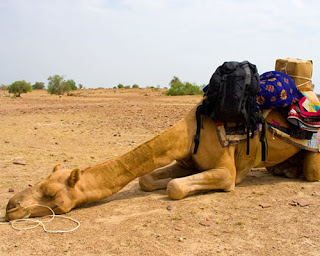 To carry someone else's burden
Is it why he was created?
To live his life for someone else
And to give as need dictated?

The straw that broke the camel's back
Wasn't heavy I suppose.
And to be a broken back-ed camel
Isn't something that he chose.
(© 1999 Marie Armenia)

A camel with a broken back is a camel about to starve to death and die. The camel's back humps keep him alive in the desert. It is filled with fat (not water) and when food is scarce, he feeds off this hidden supply.

The straw that broke the camel's back was the last straw for the camel.  We know what it mean's when someone reaches their last straw.  They are done. Finished. Unable to go on.

How do people react to a camel who's reached his last straw?

They wonder, "Why now? Why today?"
The camel had been carrying the straw without complaint or problems for a while. People assumed the load was not too heavy because the camel consistently carried it - day after day, week after week, month after month, year after year.

And then, badda boom badda bing - his back breaks???
What's up with that?

"Why didn't you say something?" they ask the camel.
The camel is too exhausted to answer or explain.
"Why didn't you notice?" is what he is too tired to say.

For a minute or two, people feel bad for the camel and the obvious pain he is in.  It doesn't take long, however, for their thoughts to turn to the fact that now they might have to carry their own straw.   Their concern FOR the camel quickly morphs into concern for themselves.

"Who's going to carry the straw the camel has been carrying for me every day for as long as I can remember?"
They get kind of peeved at the camel for having limits.

The world is filled with camel users.
They have no clue what I'm talking about, or why I'm writing about camels who couldn't carry their burden for even one more day.

But I think that every single mom, working mom, widow reading this understands completely.

I think every overworked and underappreciated pastor comprehends fully that devoted backs can only take so much burden and complaining before something inside them breaks - no matter how much they love the Lord and His people.

The parents whose rebellious child has no concern for anything but getting his own way know what it feels like to be convinced the Lord HAS given them more than they can bear.

Sometimes, like the camel.. and without warning, we wake up one day, and -

And we lay down and wait to die under the weight of what we used to be able to carry without a problem.

You don't have to lay down and die, but rise up and live with His help and power.

"Come to Me, all you who are burdened and heavy laden and I WILL GIVE YOU REST."

He carries your burden.
FOR YOU
and
WITH YOU

He promises.
He will.
He does.
He has.

The straw that didn't break the camel's back is the straw He asked Jesus to carry,

Jesus will come to you and help you carry that burden.
Today.
Tomorrow.
Forever.

People are not faithful, but Jesus is.