TO ALL THE LOSER FOLLOWERS OF JESUS 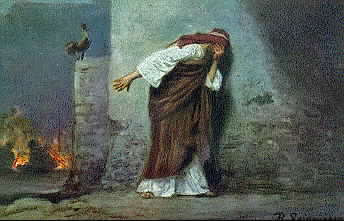 Just to set the record straight the woman writing this blog is not the perfect little church lady who has never made a mistake and has never has failed the Lord.  I have failed. BIG... TIME.  I used to think I was supposed to be the perfect little church lady and that put a lot of pressure on my already inflated ego.  It took a couple of great big failures to understand that it isn't about ME holding on to HIM but about HIM holding on to ME. He remains faithful to us.  Even when we are disappointing disciples.  During a particularly trying time in my life two decades ago I was praying about the stress filled situation I was going through.  I said, "Lord, why are You allowing all of this? Don't you already know what's in my heart?"  I heard Him answer me, "Oh, this isn't happening so that I can see what's in your heart.  I'm allowing this so that YOU can see what's in your heart."   I didn't get it then, but I had gunk inside that was keeping me from being free.  He wanted me to see who I REALLY was and not who I THOUGHT I was.   When I finally saw myself the way HE saw me... and understood that He did not get a great big bargain when He got Marie... and when I understood that He was CA-RAZY about me anyway... then I understood His LOVE.

When we fail the Lord... and we all do at times.. the enemy comes in and tells us that He's done with us.  He doesn't want us anymore.   But that is a lie.

I was reading Mark 16 this morning.  It's the story of the women who went to Jesus tomb and found it empty.  Well, not exactly empty.  They saw "a young man clothed in a white robe sitting on the right side."  It was an angel.  "The angel said, 'Don't be alarmed. You are looking for Jesus of Nazareth, who was crucified.  He isn't here!  He is risen from the dead!"

THE MOST IMPORTANT ANNOUNCEMENT IN THE HISTORY OF HUMANITY.

The angel continued, saying, "Now go and tell his disciples, INCLUDING PETER, that Jesus is going ahead of you to Galilee."

INCLUDING PETER?  The greatest announcement in the history of the world, and PETER the loser follower of Jesus gets a personal shout out from an angel?

While Peter was walking with Jesus for three years, and congratulating himself for being the most important and most dedicated disciple..


JESUS KNEW that Peter was way weaker than he thought he was.

He allowed Peter to see who and what HE ACTUALLY was... in order that Peter could comprehend who JESUS really is.

It isn't until we see our WRETCHEDNESS that we can fully understand HIS LOVE.

TO ALL OF THE LOSER FOLLOWERS OF JESUS, He says,

You are not too far gone.
Come home.

Posted by Marie Armenia at 6:46 AM