WHILE YOU'RE LIVING IN BABYLON 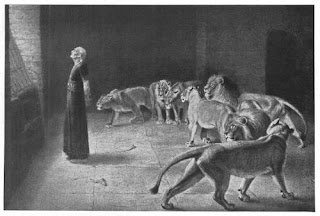 Yes.. yes.. it's a drawing of Daniel in the lion's den.  I like this artist's interpretation of the situation because Daniel isn't looking at the lions but he was looking up to God.
The backstory of the story of Daniel is that he was living as a captive slave in Babylon. God had warned His people that they would suffer dire consequences if they didn't begin to live the way He had instructed them to live. Truth is... God's warnings to them became like, "Right.. God.. blah.. blah.. blah.. Judgement.. blah.. blah.. blah.. You keep sending warnings.. and then nothing happens... "  They weren't so concerned with being God's people. Or concerned with God.  They just lived like the world around them, unwilling to be set apart.  So, He removed His protection from them and badda bing! - they were conquered and led away as slaves to heathen Babylon.

So we know the story.  The King is talked in to signing a law that specifically targeted Daniel.  A law forbidding anyone to pray to anyone but the King for 30 days. THIS IS WHO DANIEL WAS WORKING FOR --- A HEATHEN KING WHO HAD NO PROBLEM SIGNING A LAW REQUIRING EVERYONE TO PRAY TO HIM.  AND TO HIM ALONE.


Here's what Daniel DID:
Ultimately... this situation changed the opinion of the King about who is God and who is not. He decreed that "everyone throughout my kingdom should tremble with fear before the God of Daniel" (v26).  However.. Daniel didn't know he was "Daniel of The Bible."  No he was just a guy who missed his homeland... who was a slave.. doing his best to do his best in a world of Babylonian heathens.

Here's what Daniel did NOT DO:

ANYONE who names the name of Jesus is living as a marked person.  All through the New Testament, Jesus CLEARLY warns His followers that we would be hated because we love Him.  He doesn't say He will change their hatred to love and admiration. He says to not be surprised to be hated.  So why are we surprised?

So.. for those of us who are existing in "Babylon"... we can learn from Daniel that while you're living in Babylon keep your focus on the God of Heaven.   If Daniel had lived a cushy life with no resistance from the heathens.. there would be no glory being given to His God.
God received glory from Daniel's life.

If being hated will bring God glory.. then... maybe we will be like our LORD.. who was hated.. killed.. and RESURRECTED.   And is coming back to get this planet back to square one.. He will rule in righteousness.

In our flesh.. we want to protest. Scream. Lash out.
In the Spirit... we give all things to our Lord.

We are living in Babylon. Someday we will be home.  Someday our Homeland will became reality. Until then don't expect the Babylonians to act like God's people.